Gidget is a fictional character created by author Frederick Kohner (based on his teenage daughter, Kathy) in his 1957 novel, Gidget, the Little Girl with Big Ideas. The novel follows the adventures of a teenage girl and her surfing friends on the beach in Malibu. The name Gidget is a portmanteau of “girl” and “midget”. Following the novel’s publication, the character appeared in several films, television series and television movies.

Kohner, a Czechoslovakian Jew, worked in the German film industry as a screenwriter until 1933 when he emigrated to Hollywood after the Nazis started removing Jewish credits from films. Over the coming decades Kohner and his wife Franzie raised their two daughters by the beach while he toiled as a screenwriter for Columbia Pictures. As his children grew into American teenagers he noticed that his daughter Kathy in particular was drawn into a very specific, regional, contemporary slice of American teenage culture – the surf culture.

Surfing was a then minor youth movement that built its foundation around a sport, love of the beach, and jargon that must have proved a challenge to an Eastern European immigrant. The details fascinated Kohner, who was empathetic with his daughter’s feminist intention to participate in a “boys-only” sport. A book was conceived and Kathy became her father’s muse as he delved into the surfing world with his daughter as his guide. Over a six-week period Kohner wove the stories she told into a novel, which he titled upon completion with her nickname, Gidget.

In the late 1950s and early 1960s, the character Gidget (the prototypical beach bunny) was adapted for three films, all directed by Paul Wendkos and released by Columbia Pictures:

The first film also featured a young Yvonne Craig and Tom Laughlin, long before Laughlin became known as Billy Jack and Craig as Batgirl and her alter-ego Barbara Gordon in the final season of Batman. Although the latter two films were billed as sequels to the first, there was little attempt at continuity other than in the plot. Only James Darren, playing Gidget’s boyfriend Moondoggie, has the same major role in all three films. For Gidget Goes Hawaiian, some scenes from the first film were re-shot with the new cast, to be used as flashbacks.

In 1965, the character was adapted for television in the sitcom series Gidget, starring Sally Field. The series reintroduced Larue, a timid, awkward girl who often accompanied Gidget on her zany escapades, and an older married sister Anne Cooper (“Ann Cooper” in the novels), both of whom appear in the original 1957 novel but are absent from the motion pictures. Gidget’s brother-in-law, who appeared in the novels as Larry Cooper, an intelligent but condescending child psychiatrist was reinvented in the television series as John Cooper, an obtuse but lovable psychology student. 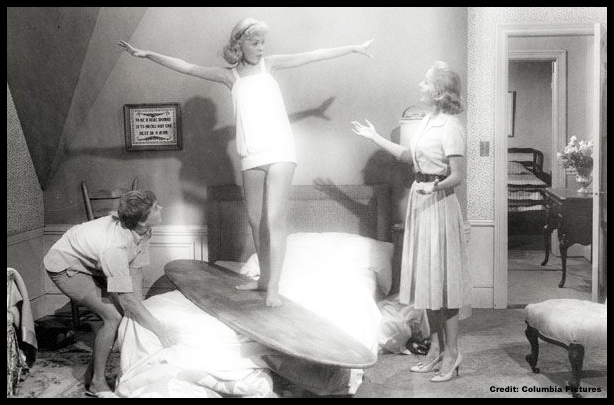 In the television series, Gidget regarded both her sister and brother-in-law as clueless squares. The pilot episode (“Dear Diary – et al.”) explains that Gidget’s boyfriend Moondoggie is sent east to Princeton University with the convenient understanding that both were free to date others while separated, thus opening plots to a variety of complications and guest stars. In the sitcom, Gidget’s mother is deceased (not true in the novels or the motion pictures), and the series focuses on the father-daughter relationship with Gidget receiving moral instruction from her father at episode’s end and growing a little wiser from it. The sitcom ran for only one season, but spawned a devoted cult following.

Sally Field as television’s Gidget in 1965.

In 1969, Karen Valentine starred as Gidget in the telemovie Gidget Grows Up, freely adapted from the 1968 novel Gidget Goes New York, but also functioning as a sequel to the 1965 sitcom series.

In 1972, another telemovie was made titled Gidget Gets Married, in which Gidget finally married longtime boyfriend Moondoggie. Monie Ellis played the title role. This incarnation of Gidget is unique in that it gives Moondoggie’s real name as “Jeff Stevens.” In the novels, the other telemovies and The New Gidget he is “Geoffrey H. Griffin” (the middle initial is mentioned only in the first novel); in the Hollywood films and the sitcom Gidget he is “Jeffrey Matthews.” Later that year, Hanna-Barbera produced a 60-minute animated feature for television; Gidget Makes the Wrong Connection, with Kathy Gori as the voice of Gidget. It was broadcast as part of the Saturday morning series The ABC Saturday Superstar Movie.

In 1985, a follow-up of the 1965 sitcom series was launched with the telemovie Gidget’s Summer Reunion, starring Caryn Richman as a grown version of the character played by Sally Field. This was followed by a sitcom series The New Gidget, which ran for two seasons, 1986–1988.

Sandra Dee
Shopping cart
There are no products in the cart!
Continue shopping